Engineers, grab your Blackberries. Scroll down to an open summer date on your calendar and plug in The Taste of NAB Road Show. It’s back!

Co-sponsored by LBA Technology, the Taste of NAB Road Show is returning for a 9th year, bringing to broadcast engineers and technicians where they live the latest electronic equipment and ideas showcased in Las Vegas at the National Association of Broadcasters convention.

In the month of July, host Larry Bloomfield and his fellow roadshow presenters will traverse Florida, Mississippi, Alabama, Tennessee, South Carolina, and LBA’s own home state of North Carolina.

Fifty-three one-day programs are scheduled for the Taste of NAB Road Show at stops in about 30 states. It is an ambitious undertaking, which Bloomfield justifies as necessary “so that some of the new technology from the NAB convention will get out to the grassroots engineers that didn’t make it to the big one in the desert.”

Organizers stress that the roadshow is not a sales event. Rather, it is an informational platform. The team of presenters will introduce such breakthrough technology as the Kathrein-Schomandl ADAM3000 analog / digital TV Analyzer and MSK-200  DTV Signal Analyzer and health-protecting SafeOne Personal RF Monitor, as well as the new Taref3 high-precision master clock by German manufacturer R.A.M. Gmbh. Because these pieces of equipment are exclusively distributed by LBA Technology, an LBA consultant will be on hand at many of the presentations.

The programs often are coordinated with local chapters of the Society of Broadcast Engineers, the Institute of Electrical and Electronics Engineers and the Society of Motion Pictures and Television Engineers. Some chapters have been known to turn the event into a barbecue social. Yet food is not why thousands of engineers have turned the Taste of NAB Road Show into a main attraction; they show up each year to see the newest equipment, hear technical presentations, compare notes with their peers – and only then maybe eat a little.

The calendar of local presentations is at http://tech-notes.tv/Taste_of_NAB.html.  Check the itinerary for contact details and specific addresses.

Bloomfield is a broadcast industry consultant and for 10 years has been host of an online industry forum site – www.Tech-Notes.TV – from which the annual Taste of NAB Road Show sprang. 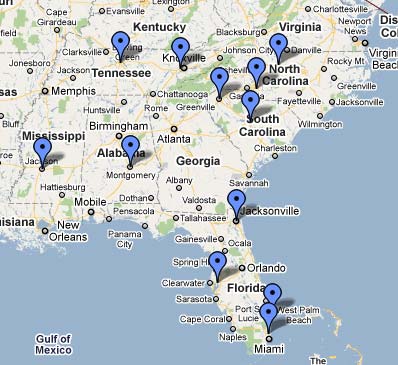