Summertime is Lightning Time – Are You Protected? 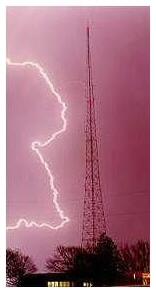 Every radio engineer and tower owner is painfully aware of the toll that lightning takes on broadcast and communications installations each year.

Lightning damages have been on the increase in the past 35 years. US government researchers attribute most of this increase to population growth, and where there is population, there are towers! Pennsylvania has the largest number of US Weather Service damage reports, while the highest rates of damage reports weighted by population are on the plains from North Dakota and Oklahoma.

According to Richard Kithil of the National Lightning Safety Institute, most reports of the economic impact of lightning are contradictory and underreported. Kithil conducted a study based on insurance reports and other sources that keep track of weather damages, and said “It seems reasonable to estimate that there may be $4 to 5 billion in lightning costs and losses each year in the US.”

The top ten states in number of lightning casualties.

Lightning accounts for a large number of casualties, as well. All those who work on or around towers are at risk. Therefore, it is important for tower operators to take measures to protect both life and property.

Proper grounding and bonding of tower structures, transmission lines and other attachment is most important in lightning protection. Adjacent buildings housing equipment need to be outfitted with a Faraday Cage as well. This may be achieved by good bonding of structural steel components and metal skins. If of non-metallic construction like may equipment shelters, an insulated halo ground of wire (#4 copper is typical) can be formed around the ceiling edges of each room with downleads in each corner to the system earth ground.

Towers can be effectively protected from lightning with top mounted dissipation arrays. These and other lightning protection products and services are available from LBA in various forms to suit the height and physical configuration. They are also available for building protection. Smaller dissipaters are recommended for attachment to individual antennas. A typical brush dissipater is shown. These devices have been shown to significantly reduce lightning strikes. This is fundamentally different than the function of lightning rods, which serve only to terminate strikes into the tower, but not to deter them. Tower top lightning rods can not deter strokes to side mounted antennas, but this is done very effectively by dissipaters!

Javier Castillo is the resident LBA expert in lightning protection. Contact him for protection to your towers and antennas.

DAS: A Review of Planning, Analysis and Design – Part 1