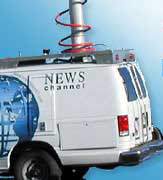 It took five years and $750 million, but Sprint Nextel has successfully bumped the broadcast auxiliary services (BAS) of more than 1,000 TV stations out of the 2GHz band coveted by Sprint. The wireless company now will take over that part of the spectrum with the blessing of the Federal Communications Commission.

Everyone involved seems quite happy with the outcome. We certainly doff our hats to all the technicians and engineers who made it happen.

“The National Association of Broadcasters congratulates Sprint on completing the Herculean task of transitioning the broadcast auxiliary services to a new, more efficient spectrum plan in the 2GHz frequency band,” NAB chief Gordon Smith is quoted in Sprint’s July 21 announcement.

The Society of Broadcast Engineers played a key technical role in the transition. The Society’s Vinny Lopez expressed the unanimous view that cooperation among broadcast industry segments was critical to the success of the undertaking. “The Society’s partnership with Sprint in this effort is a great example of how all broadcast engineers serve and support our industry and make technology work for business, government and broadcasting.”

That’s absolutely true and something of a feather in the cap for the industry. In an era of political partisanship and turf battles, the general public in this case is the beneficiary of an arcane spectrum shuffle it didn’t even know was happening. Such cooperative and successful merging of private sector capital and a federal regulatory agency is something of an exception these days.

Sprint’s move was necessary because adjacent to its 800MHz slice of the broadcast spectrum, where 48 million wireless customers chat and text one another, is spectrum allocated for public-safety broadcasts. The spillover potential was deemed to be real.

So the FCC approved what in major league baseball is called a double switch. Sprint agreed to vacate the spectrum near the public-safety broadcasts and move to the spectrum blocks at 1910MHz-1915MHz and 1990MHz-1995MHz. Then, to avoid conflicts with TV mobile news gathering units also operating in the 2MHz range (specifically in the 1990MHz-2110MHz and 2025MHz-2110MHz part of the spectrum), Sprint agreed to facilitate moving of the TV stations’ BAS systems and to financially compensate them for their trouble.

(An aside: LBA Technology engineers know full well how maintaining a signal from a mobile news gathering unit can be tricky. A technical achievement that makes complete signal testing much easier is the Kathrein ADAM-3000 or MSK-200 TV Analyzer.)

The aforementioned $750 million spent by Sprint was largely expended replacing or retuning microwave and electronic news gathering equipment so it would function in the newly allocated bandwidth. Some 1,000 engineers, tower climbers and technicians were involved in the transition project and Sprint officials were pleased to report that not a single TV broadcast was disrupted during the five-year switchover.

Affected by Sprint’s switch were the mobile news gathering systems of 213 TV stations in the U.S. and Puerto Rico; the Anchorage, Alaska, TV market was the final one making the switch.

When the Alaska station’s transition was complete, Sprint executives must have expelled a huge sigh of relief. The undertaking had been so large that Sprint and FCC commissioners repeatedly underestimated how long it would take. The commissioners more than once had to extend the original completion date, which was 2007.

The breadth of LBA solutions can be seen on the Web in the LBA Technology Index.