There is a new “next great thing” concept now moving through the land, undergoing promotion in the popular press and probably destined to be a future concern (and cost burden) to the citizens of the United States.  That term is “Smart Grid.”  And it’s a term that would be much easier to deal with if, in fact, it had a firm, well-understood definition.  But it doesn’t yet, and it probably won’t for some time.

In a general sense, the term “Smart Grid” seems to denote a public utility transmission and distribution network (it’s almost always electrical)  which a] contains an expanded number of distributed and automated monitoring and control nodes, b] is capable of instantaneous communication between nodes, leading to self-discovery of (developing and existing) problems and automatic implementation of network action to repair and to correct the problems, and c] extends utility monitoring and control directly into its customers’ premises.

Who could quibble with such a concept, which offers greater service reliability and potentially lower service costs than that which is available now on the manually-operated utility networks?  Certainly not the Curmudgeon.  But he does have a large caveat about it: “The devil, Young Grasshopper, is in the details!”

It should be noted that the Curmudgeon has received exposure to the utility industry, having worked during his long career for two different utility operating companies.  His service in the industry overlapped in time period the beginning of the Smart Grid movement.  It should also be stipulated that this is a very big and expanding technological field, only the surface of which can be touched in a blog post.

Currently electrical sub-stations (large, fixed locations where high voltage transmission lines from power generation sources terminate and power is transformed to lower voltages for distribution to end users via other networks) are generally well instrumented.  Typically, however, sub-station monitoring and control data are sent over low-bandwidth communications channels (often leased telephone lines) to a central control point, where they are reviewed and acted upon by humans.  Grid automation would increase the amount of sub-station monitoring (and probably also their communications channel bandwidths) and would introduce computer-based decision making for rapid problem avoidance and resolution.  In most cases communications channel bandwidths into sub-stations could be expanded without great difficulty and/or cost. 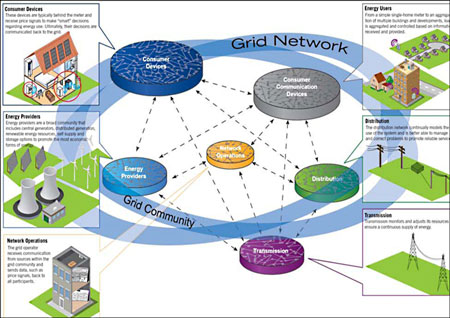 The remote assets automation problem is a larger one, however.  Even a modest-sized electrical utility will have thousands of pole, pad-mounted, and underground transformers, plus line switches, line voltage regulators, service restorers, capacitor banks (for power factor correction), etc.  Ideally, all of these need to be monitored and controlled, and thus they need to be made a part of a large decision-making loop.  This is not a trivial communications problem.

On the AMI side, the stated intent is to meter customers’ electricity usage in small time increments (ranging from fifteen minute to one hour periods), to inform the customer of the currently posted “time-of-day-based” cost of the power that is being distributed within that time interval, and then to issue bills priced accordingly.  This is known within the industry as Time Of Use (TOU) pricing.

The utilities’ primary AMI goal is to “peak shave,” to induce their customers to restrict their consumption of expensive-to-generate power during peak periods of very high demand.  This would minimize the utilities’ need for investment in the new generating stations and transmission lines that would be necessary to handle higher future peak loads.  Secondarily, it may also induce customers to improve the power-usage efficiency of their homes and businesses in response to increasing costs.

There is a second consumer-centric area, known as customer load-shedding, which also seeks to peak shave by automatically disconnecting some customer load (such as summer air conditioning) whenever necessary.  It’s relatively small in the overall scope of things, and space limitations preclude treating it here.

But the central concern with the Smart Grid concept is not whether it is worth pursuing.  It is, since there is a need for more technology leading to more efficiency in this field.  Rather, in the Curmudgeon’s opinion, it is whether the utility industry as it presently exists can design and build it successfully and economically.  There are some strong limitations and pitfalls, both within and without the industry, any one of which might result in a defective or crippled implementation.  And ultimately, since the utility world is regulated by the various states’ Public Utility or Public Service Commissions under what amounts to a “cost-plus” earnings basis, the utility’s customers would be on-the-hook for most of the failures, cost over-runs, etc.

We, the “rate payers,” are going to have to pay for all the new Smart Grid systems, all the new engineering, all the new hardware, all the new software.  This is certainly true for municipal utilities, and even the investor-owned utilities aren’t playing entirely with their own capital.  And that’s why we need to be completely assured that the Smart Grid as currently being designed and implemented will be a success and an efficient use of the rate payers’ contributions.

Next time we’ll look at some potential weak links and problem areas in the development and implementation of the Smart Grid.

This is Part 1 in a 3 part series on the Smart Grid.  Check out RF Blog again next week for Part 2.

Is the world becoming real-time, continous, and without end?