SMART ELECTRIC GRID AUTOMATION: WHAT ARE THE COSTS?

Last time we introduced the new buzzword term, the utility Smart Grid, provided a quick overview of the concept-undergoing-creation, and noted that doubts exist whether the utility industry can successfully implement it.  Now let’s spend a little time examining those doubts as they relate to the utility-centric side of the Smart Grid effort.

The first concern has to do with definitions and standards.  The problem here is that, despite much previously sunk effort, the work on both sets of items has not yet been completed.  Nevertheless, utilities are under pressure to begin the implementation anyway; it represents an expansion area for their investments and returns within an industry in which life and corporate business is pretty much “same-o, same-o” from year to year.

In that small grids inevitably connect to larger grids, small incompatibilities or deficiencies in automation systems installed today in one utility member of a regional or national grid can lead to inabilities to fully complete the mission and to gain all the benefits on the larger network.  It’s as though one utility member of, say, a southeastern regional grid brought 250 kV, 60 Hz power to the regional transmission grid operator, a second member brought 138 kV, 50 Hz power to the regional grid, and a third member brought 500 kV, d.c. power!  Yes, this mess could be accommodated with sufficient investment in additional hardware and control systems, but all the efficiency “savings” would have long evaporated!

It is true that the National Institute of Standards and Technology (NIST) is drafting a proposed set of nationwide Smart Grid standards, but these are still at least a number of months away from adoption.  Wouldn’t it make sense to wait until everyone had a chance to don the same baseball uniform before sending the team onto the field? 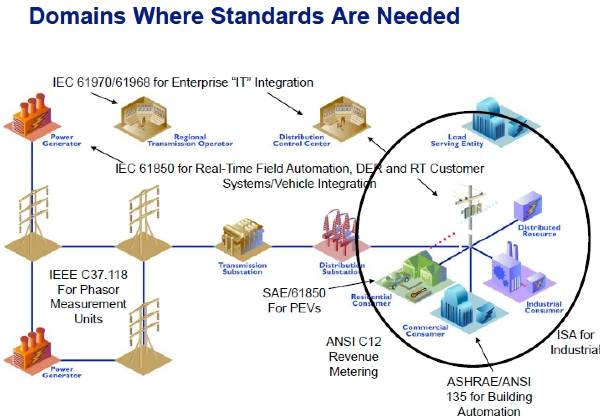 The second concern centers on the nature of the utilities themselves and their people who have to make choices, to design new network operating methods and protocols, and to make significant purchasing decisions.  And the problem here is: this sort of “new technology” development area is not what these companies have been set up to do.  They typically do not do it well.

Designing and implementing a Smart Grid necessarily involves research and development, i.e., pressing forth into the unknown.  However, in a word, utilities do not do any R&D as part of their corporate world; they have little skill in this area.  Utilities are operations companies:  “Get the electricity, gas, water, out to the customers and collect for the delivery!”  That’s the day-to-day company business.

Prior to joining the utility world, the Curmudgeon spent the previous thirty years of his career in several different R&D science and technology environments.  It became abundantly clear to him that utilities perform miserably, frankly, whenever they attempt to do R&D!  Sorry, but that’s the way it lays out in practice.

It’s not that the utility companies are lacking in skilled engineers; they do have some on staff.  But even these engineers are focused on improving current operations, not on perfecting new technology.  They can well design and construct new transmission lines, new pipelines, new fixed assets.  But they do not typically have experience in systems engineering, principles of new technology (especially in telecommunications), methods of structured investigation and exploration, and other standard fixtures of the contemporary R&D world.

The larger problem, however, resides in the utility management ranks.  While experienced engineers may be available within the corporate structure, seldom do they become management and executive-level decision-makers.  These corporate top-level individuals tend to be successful operations and/or business people, and often (especially in the critical telecommunications arena), they have no technical understanding at all of what they are managing!  “Ted, you’ve successfully led our revenue fraud business unit.  That’s great, so now we are promoting you to be our new telecommunications group manager!”  The managerial-level “technical expertise in depth” that is so ubiquitous and so indispensable in the R&D world is largely missing in the utility operations world.  And with the Smart Grid so critically dependent upon the massive use of (often yet undesigned and built) telecommunications networks, this might prove to be a fatal flaw.

The third concern centers upon Smart Grid security.  Since every node in the grid has to communicate with at least several other nodes, large amounts of operational data are perpetually flowing.  But data-in-motion are a relatively easy target for those who would seek to bring down a Smart Grid.  Data has to be accurate and secure if reliable real-time operation of the grid is to be successful.  And the data networks themselves have to be exceptionally well-hardened against intrusion and attack.  Bringing down a transmission tower is a relatively cheap and simple way to cripple a geographical region.  But paralyzing a Smart Grid operational data network, done remotely and surreptitiously, is easier and more attractive to a terrorist.  Overall Smart Grid data transmission and physical network security have to be “massive and impenetrable,” but this too is an area in which utilities do not have a strong demonstrated skill level.

There are some strong concerns here about whether the present utilities can handle the design and construction of a Smart Grid, and whether they can do so without squandering the rate payers’ money!

Next time we’ll look at the customer-centric areas of the Smart Grid.

This is Part 2 in a 3 part series on the Smart Grid. Check out RF Blog again next week for Part 3.

“THE WAY WE WERE:” DIFFERING GENERATIONAL VIEWS ABOUT TECHNOLOGY Part I