Can we save AM radio from the dust heap of history?

That is the question being widely debated today among radio engineers, broadcast owners, and regulators. The decline of AM medium wave broadcasting is not only an issue in the United States, but worldwide.

Part of the AM problem is competition from the rapid adoption of new digital media which offer capabilities beyond any analogue radio system. An AM asset is the world’s huge installed base of hundreds of millions, perhaps billions, of AM radios offering cheap and free reception. But, AM reception is highly dependent on the desired program signal being typically some 26 dB above the ambient noise level. 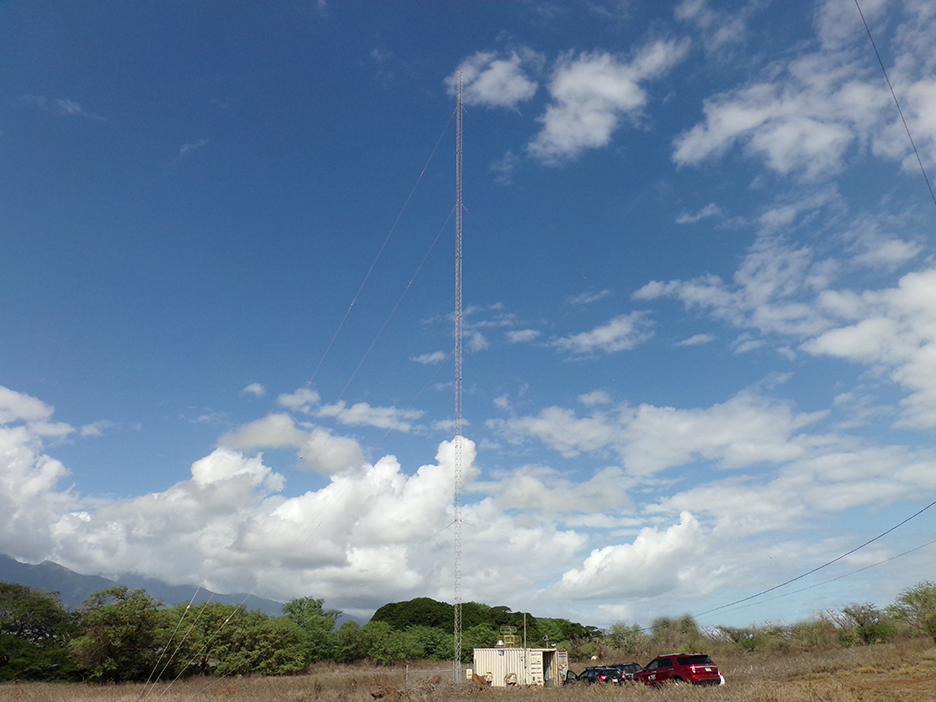 ​This is as true today, as when I originally penned this article in 2014. So what is being done about the problem today, in July 2016?

Under the prodding of AM advocates like Tom King, the AFCCE, NAB, and others, the FCC has finally mounted an inquiry to 1) see if the AM noise problem is real, 2) quantify any problems found, and 3) to determine how a formal study should be carried out. The big question still hovering is “what, if anything, can be done about it”. Nonetheless this is a major step forward.

The Notice of Inquiry was launched by the FCC’s Office of Engineering and Technology, on behalf of its Technological Advisory Committee (TAC), on June 15. Comments in Docket 16-191, the Noise Floor Technical Inquiry, are due by August 8, 2016.

An excellent summary of the action is in: http://www.radiomagonline.com/fcc/0019/fcc-advisors-tackle-noise-floor-issues/37920.

Also on the noise front, the FCC published an OET Knowledge Database article “Radio Frequency LED Lighting Products” which emphasizes the obligation of the LED lighting industry to comply with FCC testing rules to minimize RF interference. RF from LED lights has not only become a problem for AM stations, but many other users up through mobile telephone frequencies.

For those unfamiliar with the noise floor issue, or those who could use a little background refresher, I offer you the original blog content, along with selected comments of other engineers and broadcasters which have been added to the blog over the past couple of years. Your additional current comments are solicited.

The AM band today is subject to AM coverage distortion, increasing noise threats, and interference from the proliferation of wireless systems, electronic devices and low frequency radiators that distort AM signals more now than as recently as 10 years ago. The electric power grid has expanded, bringing its own noise contributions from corona, arcing, and other modes. And, urban areas with increasing industrial activities have further added RF noise to the environment. As a consequence, AM stations have increased power to raise their signal to noise ratio in an attempt to preserve their coverage areas, often interfering with other stations. However, there is a limit to power increases, both economically and technically; limits now reached in many cases. 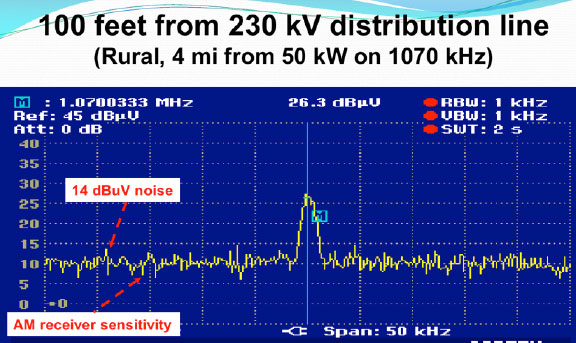 The severity of interference is variable, dependent upon such factors as location, frequency, weather conditions, and other factors. Power line interference may actually decrease in wet weather. Or change with varying electric load conditions. Much unintentional interference is local in nature, but the cumulative impact can be extensive. In the case of power line interference, the impact is extreme on automobile radios, whose travel path often parallels electric systems. In one power line field investigation by LBA’s Chris Horne, the signal of a 50,000 watt radio station was found to be unusable only four miles from the transmitter on a car radio. The signal to noise ratio was measured to be 16 dB, 10 dB less than that mandated by the FCC for good AM reception. By present FCC standards, this station should have a “clean” signal out to almost 100 miles! LBA has been providing AM technical consulting services to US and international broadcast stations for over 50 years, during which we have seen this deterioration first hand.

This interference limiting impact on a typical AM station coverage may further be seen in an example. A hypothetical 10,000 watt AM station at 1000 kHz projects a usable signal to 75 miles under noise assumptions of 50 years ago. Many consider that noise levels have risen at least 10 dB, and often much more, in populated areas. That noise increase would shrink coverage to 45 miles, or a coverage area decrease of 64%. To overcome this, a power increase of 10 times, to 100,000 watts, would be needed. If even possible from a regulatory standpoint, this would represent an enormous increase in investment and operating costs, an increase in the station’s interference impact to other coverage areas, and an increase in carbon footprint. 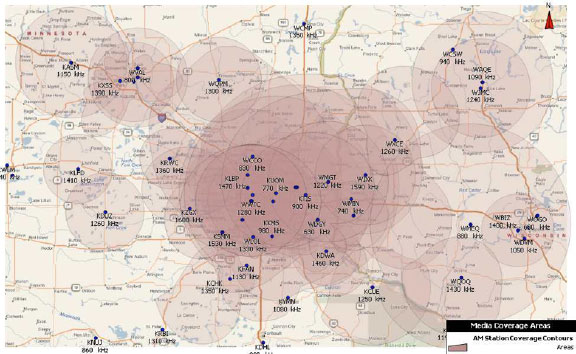 AM stations are often already densely allocated, as in Minneapolis, MN, USA <wirelessmapping.com>

Some administrations are attacking the AM problem. In India, for example, a conversion unique in the world is underway to make the AM infrastructure digital using the more robust DRM system to combat RF noise and coverage issues (for which LBA Technology has furnished DRM ATU systems). In the United States, an effort is underway to improve AM band analog performance through revised technical standards, FCC enforcement and cooperation from industry to restore listenership and revitalize the AM band. Ambient RF noise reduction figures prominently in those proposals.

In a Notice of Proposed Rulemaking (NPRM) late last year, the US Federal Communications Commission laid out their plan for AM revitalization in MB Docket No. 13-249. The Commission’s last comprehensive examination of the technical, legal, and policy issues relating to AM broadcasting took place a generation ago, in a proceeding that began with a 1987 Notice of Inquiry. In addition to some technical rule changes, the NPRM considers allowing more AM broadcasters to supplement operations by using FM translators. However, many believe that this is a policy strategy, not a technical strategy to economically save AM band broadcasters.

[Update Note] The FCC did grant some relief to AM stations in 2016, much of it centering on increased opportunities for AM stations to obtain FM translators. Some proposals are still pending, but not much has changed for AM service.

Those that don’t see the FCC action going far enough fear AM listenership may die soon if the band is not managed by the FCC in cooperation with licensees, utility companies and electronic device manufacturers. Questioning the direction of reform, FCC Commissioner Pai has said “Technical limitations have contributed to consumer migration away from AM. What steps can the commission take so there will be vibrant AM radio service 10 to 15 years away”? 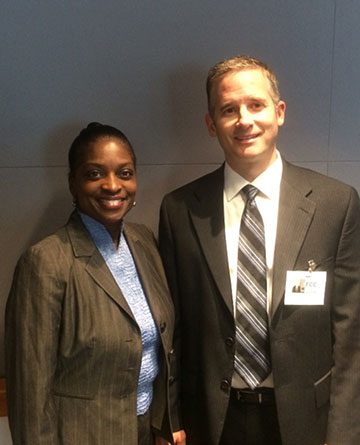 Our CTO Chris Horne, PhD, PE was recently invited to a conference at the FCC where he and a number of broadcast industry leaders laid out their concerns about AM band revitalization.

It is the opinion of many radio engineers, including those at LBA Group that the increase in power transmission and distribution line construction by utility companies and lack of focused attention to transmission line noise has elevated the AM band issues in many geographic areas. Further, that noise from PCs and devices that use microprocessors or microcontrollers must be addressed from an FCC Rules Part 15 and Part 18 incidental interference certification and auditing strategy. Such devices are often connected to wiring infrastructures within homes and businesses, and such infrastructures often function as radiators. Compact fluorescent lights and some LEDs are a growing problem which requires strong and uniform radiated emission standards. 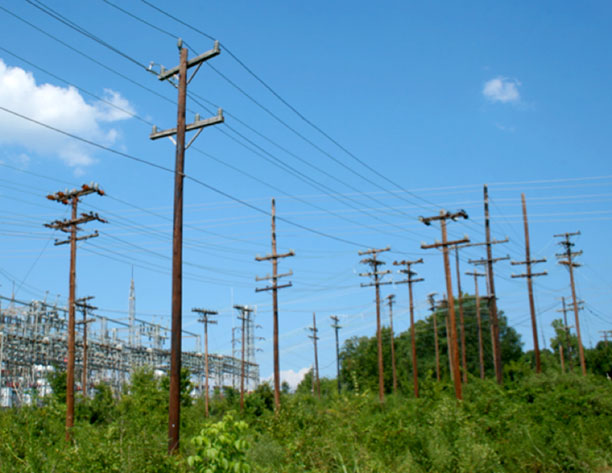 The FCC is limited in staff to enforce incidental interference rules, and this should also be addressed, while the AM stations, as victims, should demand action of both the FCC and offenders, such as electrical utility companies, to identify and clean up noise.

LBA is involved on many fronts in identifying and remediating RF noise and interference. Chris Horne recently made a presentation to the Association of Federal Communications Consulting Engineers (AFCCE) in Washington, DC which goes into considerable technical detail about the AM noise interference problem. His presentation slides can be viewed here:
AFCCE AM Revitilization from Lawrence Behr

LBA’s “Old RF Curmudgeon” has written a series of blogs which vividly explore the background of RF noise and spectrum policy in more detail: https://lbagroup.com/blog/tag/curmudgeon/

Lawrence Behr is CEO of LBA Group and is an accomplished writer and public speaker on radio frequency matters. His experience with RF and electromagnetic compatibility matters spans over 50 years. He is an RCA Fellow and an SBE Fellow. Lawrence is a long-time amateur operation (K4JRZ) and enjoys hiking and canoeing.

The Health and Future of AM Broadcasting?

Is the world becoming real-time, continous, and without end?