Lightning masts are an effective way to protect a wide variety of fixed and portable installations from lightning damage. They are different from structure mounted forms of lightning protection, often referred to as “lightning rods”, as they are made of a single long mast which is raised to a height typically from 10 to 50 feet (3 to 15 meters).

Lightning masts are usually not mounted to the object that they protect. They are designed to project well above the protected area, and are place near, but not touching the protected objects. Lightning currents are conducted away into a ground system, rather than into the object.

This is the opposite of the action of traditional “lightning rods”. They are attached to a protected structure and appurtenances and rely on the conductivity of metal portions of the structure, through grounding wires, to conduct lightning currents away safely with respect to fire damage.

Lightning masts provide a much greater degree of protection to controllers, electrical devices, and other critical equipment than do traditional systems. They may also be combined with traditional structural systems to provide “spot” protection to HVAC systems, communications gear, and other structure mounted assets. 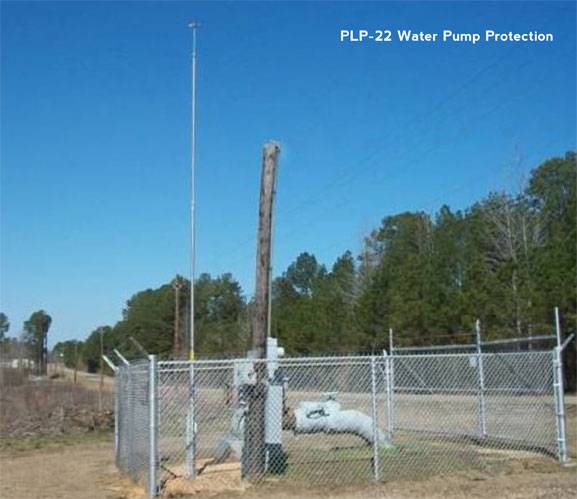 Many lightning masts are made as galvanized steel monopole structures. These are very heavy, require special transport, and are intended for only permanent installation. These features make them expensive to procure and install. Consequently, they have been little used outside of power substation and heavy industrial applications.

The other end of the scale is represented by LBA Technology’s PLP lightning masts which are made of aluminum, are lightweight, and are modular for easy transport and installation at fixed and temporary sites. This makes them relatively inexpensive and simple to deploy. These features have enabled innovative applications such as protecting irrigation and utility water pumps, mobile satellite dishes, and mining camp structures.

Usually, the alternatives to lightning masts are shield wires. However, lightning masts are advantageous over shielding wires in that they are more robust, do not require multiple support towers, and are generally less expensive to install and maintain. Indeed, there have been cases where shielding wires have failed due to the high lightning stroke current, putting objects below in danger, and causing the installation to be without protection!

The protected area around the mast is called a "zone of protection". The design objective is to provide a sufficiently high mast that all surfaces of the objects to be protected fall within this zone. For instance, a small building in the form of a 10 foot cube (3 meter) could be placed approximately 20 feet from the mast and be in the zone of protection.

This zone of protection is usually determined from the “rolling ball” method of the National Fire Protection Association (NFPA). However, it can be roughly visualized as an area on the ground which lies under a 45 degree cone-shaped depression from the tip of the lightning mast. Using the “rolling ball” method, arrays of multiple lightning masts can be designed to expand the protected area.

Lawrence Behr is CEO of LBA Group and is an accomplished writer and public speaker on radio frequency matters. His experience with RF and electromagnetic compatibility matters spans over 50 years. He is an RCA Fellow and an SBE Fellow. Lawrence is a long-time amateur operation (K4JRZ) and enjoys hiking and canoeing.

Summertime is Lightning Time – Are You Protected?