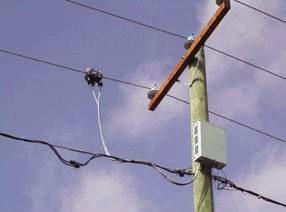 Usually such a new data service would not be of particular interest to radio system operators and would receive little attention from them. BPL, however, is different for two important reasons, and it can affect your radio system operations if it is established in your area.

The radio frequency range over which BPL operates can potentially extend from 2 MHz to about 80 MHz. Regrettably, at these radio frequencies overhead power distribution lines, situated well above ground on utility poles, form fairly efficient antennas, and the data signals can be radiated from the lines into space. These overhead electrical distribution lines were never designed to carry radio frequency energy and they do not provide the electrical shielding necessary to prevent inadvertent radiation of the BPL radio frequency signals into space. In contrast, cable television data services operate through coaxial cables, while telephone-based data services use “twisted pair” cables, both of which do shield against unintended radiation of their equivalent radio frequency signals, and fiber optic systems are self-contained “light pipes.”

Thus BPL systems can act as inadvertent radio transmission systems, operating continuously and creating radiated (and also conducted) interference to existing radio communications over wide areas in their geographical service territories. Field tests have already indicated the potential for problems. In geographical areas where demonstration BPL networks have been operated, Amateur Radio Service operators have reported “radii of obliteration” for (short-wave) signal reception extending up to one-half mile distance from an individual overhead electrical distribution line. Such signal reception destruction, as might be expected, increases as the proximity to the power line also increases.

The FCC rules in 47 CFR 15.615(f)(2) establish so-called “excluded frequency bands” where BPL cannot operate because of potential interference with critical receivers and also establish “exclusion zones” in locations close to sensitive operations such as Coast Guard or radio astronomy stations. This is particularly critical with respect to a large number of USCG radio stations providing GMDSS safety and distress communications on 2182 kHz and other MF and Shortwave frequencies. These stations rely on a low noise environment to hear calls from ships in distress off our coasts.

Since RF emissions from Part-15 regulated BPL systems do have the potential of causing interference to existing licensed radio services, any BPL interference that does occur (true also of any unlicensed device regulated by Part 15 of the FCC rules) is nominally required to be corrected by the device operator. However, the new FCC Part 15 Rules for BPL do not strongly recognize and enforce the rights of existing radio system operators to protection against interference from newly established BPL networks. Moreover, many electrical distribution utility companies, who will be the operators of these BPL networks, have no practical experience in resolving radio interference complaints.

It will be incumbent upon you, the radio system operator, to recognize, to document, and to prosecute the fight for relief from BPL interference. LBA, with its extensive experience in radio interference identification and resolution, can help you with this. LBA suggests that you monitor developments with your local electrical distribution utility to determine if/when they establish a new BPL network, routinely observe your radio operating environment for unexplained increases in the radio noise level and decreases in system performance, and contact LBA if trouble is suspected.

AMITRA Engineer of the Year honored by LBA Technology