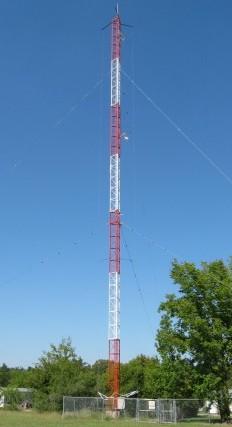 For all its years, it had remained a single tower 1000 watt daytime station on 1150 kHz. That was, until owner Rodger (Bill) Watkins resolved to increase coverage and add night operation. There were multiple problems to surmount including a very small site, bad location for city coverage, and seemingly impossible protections to other stations. In fact, his then consulting engineer said it couldn’t be done.

Bill is now retired from radio, and he and Lawrence have become close friends over the subsequent years. This past October, the two friends visited in College Station and returned to the WTAW (now KZNE) site where the directional system is still in great shape and working with the original equipment designed and installed by Behr 33 years go!

The snapshot shows one of the LBA Technology TuniPole™ folded unipoles installed on a very short tower in the three tower directional antenna.  Among the unique features of this antennas system is the use of folded unipoles on all three towers, two of the towers about 45 degrees high and closely spaced, and a site under five acres.

After 45 years, LBA still performs challenging broadcast system designs and fabricates AM antenna systems of all types for installation worldwide. Contact us to help on your project via email or call 252-757-0279.

Where in the World is LBA?