Ships sailing in waters near Guam have a new connection to shore. The island’s NAVTEX navigational telex broadcast system has been upgraded by replacing three conventional 300’ vertical towers with one small aperture SAMWAS antenna.

The unique SAMWAS medium wave antenna system is a product of LBA Technology, a North Carolina telecommunications firm with over 40 years experience in antenna innovations. The company’s engineered solution for the Guam site is replicable at most other NAVTEX locations worldwide. 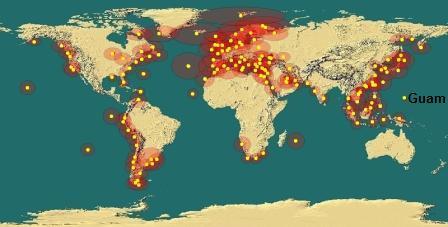 The coastal telex broadcast system called NAVTEX is a vital link for commercial and military ships operating within 400 miles of a coastline. NAVTEX is a maritime safety system typically operated by navies, coast guards, or lighthouse authorities in coordination with the International Maritime Organization (IMO). The shore-to-ship signals are sent out at either 518 kHz or 490 kHz.

For the US Navy transmission site on Guam, LBA Technology used a suite of subsystems called SAMWAS-200 that incorporates a grounded 199 foot electrically short transmission antenna rated at 2500 watts. Installed for LBA in the spring of 2009 by Guam contractor AIC International Construction, the antenna’s propagation of medium wave signals has proven effective and efficient, though its physical footprint is much smaller than the three-tower system it replaced.

The short height avoided the need for aviation safety lights and the associated installation and operating costs. The grounded tower reduces system vulnerability to lightning and reduces RF safety hazards.

The transmitter building is located fully 3,000 feet from the tower. As the dual frequency SAMWAS-200 Phantom-E™ remote control system can use a coaxial cable as its sole connection for both RF and control signals, an existing coaxial cable was utilized with no new trenching for electrical services. The Phantom-E™ system selects between 490 and 518 kHz frequency modes.

As there are no moving RF parts in the SAMWAS tuning unit, it is expected to function reliably for years with minimal maintenance. Because of the stability of the overall system, periodic retuning is not needed to accommodate changing environmental conditions.

For tactical communication situations, LBA Technology offers medium wave transmission systems integrated into trucks or trailers, and smaller emergency units that can be assembled on site by hand.  See all mobile tower offerings from LBA.

What’s All This FemtoCell Stuff, Anyhow?