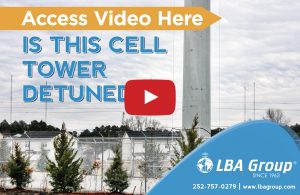 If you are involved in cell tower construction, this is a very important question. Few people associate AM broadcast and cellular radio. After all, they are a thousand megahertz and 100 years apart!

So, a quick physics lesson: In AM radio, the tower itself functions as the antenna, while cell antennas are mounted on a support-only tower. Consequently, a nearby cell tower, water tank, power pole or other metal structure can intercept the AM signal, pull it out of the air, and become an unintended part of the AM antenna system, reradiating the AM signal and distorting the broadcast station’s FCC-authorized AM radiation pattern. However, the AM station has no effect on the cellular antenna, so its presence is often ignored by cellular engineers.

Once upon a time, cell tower site acquisition people kept new towers several miles away from AM stations wherever possible. In the current cell environment, engineering requires much more density of cell towers, so locations near AM stations are becoming unavoidable.

There are three primary reasons why “Is this cell tower detuned?” is such an important question to answer on your job site today:

The FCC requires that tower owners and cell carriers construct and maintain detuning systems on some towers that are close to an AM radio station. A tower near an AM radio station could distort the AM coverage pattern beyond an acceptable level in which case the installation and maintenance of AM detuning hardware is required. It is a violation of FCC rules by both the tower owner and the leasing carrier if an AM detuning system is disrupted or disabled through construction activity. For more, read this FCC AM detuning rules blog.

Your company may be liable to the tower owner or licensee for FCC fines and repair costs; or even civil damages to the affected AM station, if a tower crew damages an AM detune system. If its proper performance is not verified prior to your crew starting work, you could still be liable for a problem caused by earlier tower work.

While a tower that is FCC licensed as an AM radio station’s tower or part of an AM station’s multi-tower array is considered a “hot” AM tower, it is possible for some of the radio frequency energy from a high powered AM tower to be transferred to a cell tower that is very close to an AM tower or AM tower array. A cell tower that is extremely close to an AM tower is not a “hot” AM tower from an FCC standpoint, but still could be intercepting a high level of RF energy from the nearby AM effectively making it a “hot” tower under OSHA. All proposed installations near AM towers must continue to be evaluated for FCC and OSHA compliance with respect to maximum permissible exposure and shock and burn RF hazards, and the AM station(s) should be recognized in the site RF safety plan. Workers on such sites should also be trained in AM RF safety.

Virtually all cell tower detuning systems such as LBA Technology’s Detunipole™ system utilize from one to six vertical wires running parallel to the tower. The most common configuration is three wires running parallel to the tower and evenly spaced around the tower. These wires are called foldwires. They often run the length of the tower, supported out several feet on standoff insulators, and are terminated into a control box at the base of the tower.

Be aware that AM detuning system design and configuration is driven by complex engineering factors, so there are many variations in use. Be suspicious of any long vertical wires anywhere on the tower. You can view a detuning system video which will help you recognize common detuning configurations.

Most often foldwires on a tower means it is detuned, but there are some cases where a similar configuration of wires running parallel to the tower and held away from the tower by insulator standoffs is a folded unipole or LBA ColoPole™ on an AM station tower. This would be considered a “hot” AM tower or an AM colocation. Get more information about “hot” AM towers in the blog article, “Is This Cell Tower a “Hot” AM Tower”.

What does an AM detuning system do?

An AM detuning system is passive; current is induced by the nearby AM RF signal. The length of the foldwires and the components inside the network tuning cabinet are designed to detune the tower against the AM frequency, making the tower appear as electrically invisible as possible at the AM’s frequency. This is what prevents the tower from reradiating the AM signal.

However, it is not often possible to feel current in the foldwires, even though it is there, because only small amounts of signal can disrupt AM coverage. There are exceptions where even dangerous RF currents can exist, which we will discuss subsequently. Odd as it may seem, the RF currents do not go away when the tower is detuned, they are only modified by the detuning box in a way that “cloaks” the cell tower to make it electrically invisible at the AM frequency – magic!

How can damage to a detuning system be prevented?

It is essential that responsible parties on cell site construction jobs be able to recognize a detuned tower and work out a safe approach with the owner. It is also important that crews be able to recognize some common problems that alert to defective detuning systems so the system can be put in order before or soon after any modification is made on the tower.

The insulator standoffs and foldwire support beams should never be used as climbing pegs or climbing support. Doing so may damage or break them and impair or totally disable the detuning system. More important, they are not designed for climbing and serious injury or death could result!

Foldwires should always be properly tensioned as specified by the manufacturer. Improperly tensioned foldwires can create a safety hazard and can also be damaged as they are moved about by wind. Often, loose foldwires indicate damage by prior tower work, and the system integrity should be carefully checked and any discrepancies reported to the tower owner before beginning work to avoid liability for prior acts of others!

Other than at the top support arms, a foldwire should never be touching any metal part of the tower or tower fixture. If new installations might bring metal in contact with a foldwire, the detuning system provider should be consulted for appropriate engineering solutions. Usually, special foldwire insulation or additional insulations can be specified to permit the installation to go forward.

Shorting a foldwire against a metal part of the tower can reduce detuning effectiveness, or totally disable the system, and sometimes cause serious damage to components inside the detuning cabinet. After any modifications, the detuning provider should retune and certify correct operation. Remember, impairing a detuning system is a violation of FCC rules!

A word about RF safety

Just the presence of a detuning system on a tower is an indication that a “hot” AM tower is somewhere nearby. Like a gun, you should consider it “loaded” until you verify otherwise.

All towers, to one degree or another, pick up AM broadcast signals and rebroadcast (reradiate) those signals. As indicated above, towers are detuned to suppress that reradiation. Put simply, all the signal then remains in the detuned tower.

However, since the tower is grounded, you would not feel any RF by touching the tower or grounded transmission lines. The foldwires are not grounded at the base, so they should be avoided if there is any question about hazardous RF currents.

Most often, a detuned tower is not close enough to an AM tower for hazardous RF to exist.

Unless a detuned tower is within a few hundred feet of a high power AM station, there is virtually no chance of workers being exposed to maximum permitted exposures (MPE’s) above OSHA limits. If it is, that information should be part of the tower owner/carrier RF safety documentation. However, shock and burn incidents may occur at somewhat greater distances.

If the proximity is such that RF exposures are a concern, it should be taken into account that AM stations may operate with different antenna patterns and/or different powers day and night. This may be either hazardous or helpful, so coordination of construction activity with the station should be part of project planning. Often the detuning provider can be helpful in this coordination.

It should be noted that neither the FCC nor OSHA has established limits on so-called “shock and burn” contact RF hazards, but OSHA recognizes shock and burn as a hazard. (In Canada, Canadian Safety Code 6 current limits should be considered for work there.) The FCC has guidance on RF safe levels in Bulletin OET-65. It is possible for contact current to pose a direct burn hazard, but most often it is a “startle” hazard. This could startle a climber into losing their grip, dropping a tool, or other action with secondary safety implications.

Unless you believe there to be seriously high RF voltages on the foldwires, a long-handle screwdriver provides a useful test. Holding a long bladed plastic handle screwdriver on the plastic, touch the blade to the detuning cable where it enters the control box. This is normally the highest voltage point in the system. If a strong, sustained arc is seen and heard, back off and get RF technical advice. However, a weak arc or no arc is a good sign.

In this case, for a further check using work gloves, grasp the shaft of the screwdriver, touch the test location. If no burning or discomfort is felt workers should be OK to safely work around the system. If it passes this test, you can also try a bare hand touch with minimal risk. This will be the normal case on most detuned towers; the RF is only strong enough to be detected by instruments.

Another RF safety suggestion: Rigging a tower, detuned or not, can pose safety risks to rigging cables as well as personnel handling any conductive objects elevated on the tower and ground. This is a consideration under OSHA crane standards, and this blog on rigging RF damage will give you a shocking example of why RF must not be ignored.

A final caution: Do not attempt to repair any apparently defective detune system rigging. As simple as the repair may seem, it will likely leave the system untuned and out of FCC compliance. Only an experienced technician can properly return a detuning system to operation and verify its compliance. In the case of LBA Detunipole™ systems, you can contact a technician through 252-757-0279 or lbagrp@lbagroup.com with the nameplate information for assistance. As LBA Group companies are the major provider of AM detuning systems in the world, they often can provide guidance or service on other system types as well.

LBA University offers an AM detuning course and certificate of completion. This is important training for site managers, superintendents, and crew leaders.

This link will help you learn more about detecting damage in detuning systems. Many more blogs on detuning and related subjects are in the LBA Group Blogs webpages.

Six Tips for Owning Safety in the Workplace