A Verizon technical manager, just learning about the CoLoCoil®, recently inquired “How well does the product hold up to lightning strikes? I’ve had to change melted isocouplers quite a few times.”

This is an excellent question, because the patented LBA CoLoCoil® is fundamentally different from AM isolation devices generically called “isocouplers”. These old-style isocouplers have been around the AM industry for years and gained a reputation as veritable “fuses” for lightning strikes. Here’s why.

The traditional isocoupler essentially breaks the coaxial cable inner and outer conductors to isolate the AM energy on the tower from ground. The open ends of the coax are them formed into capacitor plates or coupling inductors, with a small gap between input and output for the UHF energy to transit with as little loss as possible. In addition to being bandwidth limited, the small air gaps are a failure point for lightning to jump to ground. The old isocoupler is basically a spark gap, being an open circuit to DC and AC stroke energy, so it’s a matter of whether the tower lightning gap arcs first or the isocoupler. Because tower lightning gaps are often set wider than the isocoupler’s guts, it’s the isocoupler that fries!

On the other hand, the CoLoCoil®, the new isocoupler, uses unbroken coaxial cable (typically up to six bundled). This is also a nice advantage if you need DC bias. The coaxial cable is formed into a rugged coil with low inductance, resonated by a capacitor. This produces almost no effect on the AM tower energy, but presents a low resistance DC ground to the AM tower, and also low AC impedance to ground at lightning frequencies. The DC ground eliminates tower static buildup, which can precipitate destructive flashovers in conventional isocouplers. The bulk of energy in a lightning strike is well below the AM band frequencies, so the heavy copper coax coils provide a massive bypass for much of that energy, and an internal lighting gap provides an additional safety barrier.

Not saying it can’t happen, but with dozens of CoLoCoils® deployed in lightning prone areas for years, we have never had any lightning damage reported. The coaxial cable coil is no more vulnerable than any other coax component on the tower. A resonating capacitor failure is possible, but that would not affect the wireless antenna coax system in any way. The impact on the AM might be anywhere from none to off air, depending upon the AM tower base impedance. An isocoupler meltdown would almost always be catastrophic, with both the AM and wireless systems being put “off air”. So, among its other attributes, the CoLoCoil® is the most reliable approach to AM collocation. 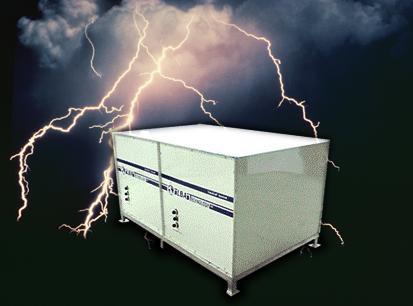