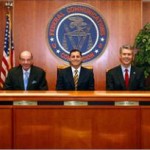 In a unanimous decision Thursday, the FCC opened up TV white spaces spectrum for use by unlicensed devices, while reserving two channels for wireless microphones. The Commission rejected arguments that white space broadband use was uncontrollable and threatened over-the-air TV.

The FCC voted 5-0 on rules for that move.  The FCC believes these guidelines could be a model for opening up other bands to more efficient use, which it plans to do.  The ruling modifies the original spectrum-sensing requirement ruling issued two years ago, in which unlicensed white space devices were allowed to detect occupied spectrum and move to unoccupied spectrum.

This is a defeat for broadcast lobbyists who fought against the ruling for fear of interference to DTV and HD signals.  “NAB’s overriding goal in this proceeding has been to ensure America’s continued interference-free access to high quality news, entertainment and sports provided by free and local television stations,” said NAB spokesman Dennis Wharton. “We look forward to reviewing the details of today’s ruling.”

“As with most highly technical decisions, ‘the devil is in the details,'” said David Donovan, president of the Association for Maximum Service Television, broadcasters spectrum lobby. “Those details must be explored fully.”

The FCC directed the Office of Engineering and Technology to create a database that will include information on wireless microphone venues. The agency has given experimental licenses to several cities and seen how the spectrum could be used for telemedicine, connecting larger school campuses, machine-to-machine communications and smart cities applications, said FCC Chairman Julius Genachowski.  However, beyond super Wi-Fi, the most innovative services could be on the horizon, he noted. The last time the FCC released a decent chunk of unlicensed spectrum was in 1985.

In a secondary action, the FCC provided relief for the growing use of wireless microphone, heretofore often illegally. “It’s clear that the FCC carefully considered the needs of wireless microphone users while crafting this Order,” said Sandy LaMantia, President of Shure Inc. “The reserved channels will provide a safe harbor in which musicians, small theaters, houses of worship, and businesses can operate their wireless microphone systems without interference from new TV Band Devices.”

Proponents of the administration’s broadband plan were ecstatic. “Releasing unused spectrum is a sure-fire way to promote innovation and provide low-cost internet to folks in Western Massachusetts and across the country,” said Senator John Kerry in a joint statement. “While broadband is an indispensible resource to millions of Americans and businesses across the country,” added Senator Olmpia Snowe, “nearly 14 million citizens are still unable to use it due to lack of access,” said Sen. Snowe.  “The ‘white spaces’ spectrum provides an opportunity to reach these Americans and further bridge the ‘digital divide’ that unfortunately continues to exist today.”

From the FCC White Spaces Docket: “TV white space spectrum is considered prime real estate because its signals travel well, making it ideally suited for mobile wireless devices. Unlocking this valuable spectrum will open the doors for new industries to arise, create American jobs, and fuel new investment and innovation. The National Broadband Plan noted the importance of unlicensed spectrum in creating opportunities for new technologies to blossom and recommended that the Commission complete the TV white spaces proceeding as expeditiously as possible.”

In spite of the euphoria on the part of the FCC and Obama administration, serious questions have been raised as to whether this action fulfills a real world need, or a political agenda. LBA has explored those issues in http://rfblog.lbagroup.com/surprise-reaction-broadband-campaign/ and http://rfblog.lbagroup.com/the-national-broadbandwagon-plan/ .

What’s All This FemtoCell Stuff, Anyhow?