“RESOLVED: OVER-THE-AIR BROADCASTING IS A DINOSAUR AND SHOULD BE ABOLISHED IMMEDIATELY” – Part II: Internet Expansion Is Our Game 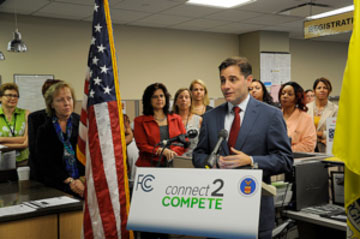 As noted in Part I of this series, the FCC is threatening to sharply curtail or eliminate traditional over-the-air television broadcasting in order to “liberate” its prime spectrum for expansion of the nation’s “broadband superhighway.”  This proposal is, as the Curmudgeon has long maintained, a “cheap and dirty alternative” to the effort needed to create a permanent, high quality solution for facilitating the future of the Internet, a solution that would serve the nation efficiently and well for the forthcoming decades.

A successful expansion is a worthy goal; the Internet is, after all, the nation’s fundamental and most critical information dissemination system.  However, blindly following the present proposal may very well destroy far more than it could ever create!

The problem centrally sits with the design of the Internet itself, as a point-to-point network system.  But re-engineering the basic structure of the Internet wouldn’t seem to be either feasible or desirable.  The Internet’s huge usefulness lies with the fact that it has had the capacity (so far!) to support point-to-point networks with message delivery services directed to individual nodes.  And that is a very good thing.  But future Internet network expansion will demand increased operating bandwidth in direct proportion to the growth in both user numbers and new kinds of services.

Each individual land line carries its own maximum usable bandwidth, set by the characteristics of the medium itself (copper or glass).  That maximum bandwidth is unaffected by the presence of other communications channels on other adjacent lines.  Thus as a class land lines can support huge amounts of future expansion.  If the potential bandwidth in one physical line becomes saturated, a second line can be pulled in next to it and the game begins anew.

Wireless networks cannot match this expansion potential: the common spectrum is used for many different purposes, and it is finite in extent.  Therefore, there would seem to be some advantages in first considering land lines for expansion.

Installing new land lines is a huge capital expense, one which the existing major land line carriers will not support without significant incentives.  Of course, they do know that their existing copper “outside plants” are old and wearing out, and these existing facilities already could not support a future ultra-high speed Internet.  In many locations the copper badly needs to be renewed or replaced.   But the carriers are reluctant to replace old copper with new copper, since metallic land lines are bandwidth limited and thus are expansion-limited for the future.

What are the network enhancement options?

Instead the carriers could opt to pull in new fiber to replace the copper; on an engineering basis this would seem to be quite a reasonable thing to do.  Most carriers already have fiber distribution of their trunk lines to distribution nodes in the field, but they then use existing copper lines (either twisted pair or coaxial) to deliver traffic from the nearest node to the customer premises (the “last mile;” or, in the case at the Curmudgeon’s house, the “last 2000 feet,” a distribution line which he has physically walked).   And that final copper hop sets the limiting bandwidth for the network, especially if the copper line is old and deteriorating.

An all-fiber network has an inherently huge operating bandwidth, and by using Dense Wave Division Multiplex (DWDM) and other techniques under development, the bandwidth available on a single fiber can be multiplied many fold with a just change out of the associated photonics.  An all-fiber network is “future proof!”

Initially the land-line carriers started down this all-fiber road by supporting the installation of “fiber to the house” (FTTH) offerings, especially for provision of service to new construction developments.  But their efforts are now faltering.  The carriers are not willing to undertake fiber “last mile” expansion as part of general re-provisioning for their future business.  But why do they balk; everything would seem to favor going to an all-fiber network?

Why isn’t this happening?

An answer is that each major carrier essentially holds a monopoly on the physical lines in its own service territory (perhaps a duopoly is a better characterization), with both telco and cable TV serving each franchise territory with their two networks).  No one else has any significant land-line network presence in these territories.  Thus there is still no effective competition to provide state-of-the-art high speed, low cost service to the country’s citizens and businesses, even though strong customer demand exists for better service and good current revenues are available.  (U.S. citizens have no independent knowledge about how poor and how expensive, relative to other countries, their typical Internet service really is!)

And there are no enforceable national standards yet developed for a “Universal Fiber Service” that would provide the benefits of a seamless all-fiber network extending across the nation.  But the “Universal Service” ideal had been the effective driving force behind the development of the national telephone network at the beginning of the twentieth century.  And, in a slightly different guise, also for the National Defense Highway System, begun in the 1950s, that has served this country so well.  Thus the carriers feel no competitive or regulatory pressure to do upgrades, when “we can do quite well with our quarterly bottom lines with just our present networks!”

Nor are these commercial carriers driven by the FCC; the Commission has readily bought into the carriers’ proposition that future Internet expansion can be done largely via wireless, and that a Universal Fiber Service is really unnecessary.  By endorsing the carriers’ plans the FCC gains the opportunity to auction more of the publicly-owned RF spectrum irretrievably into private hands and thus to continue to appear as heroes to its funding agency, the Congress.  Everybody would seem to “win” on this one, except of course for “Charley Consumer” who is stuck with the high costs of lack of competition and of bungling bureaucratic management from a ‘regulated monopoly.”

In the Curmudgeon’s view this is really a huge loss, both for the country as a whole and for the carriers themselves.  The US will not have a modern, high speed, expandable Universal Fiber Service, and we will eventually watch from the sidelines as even Third World countries surpass the U.S. in Internet access and capabilities for their citizens.

And the carriers will have lost a once-in-a-generation opportunity to validate one of the long-standing propositions of American free market enterprise.  Business spokesmen have long proclaimed, “Liberate us from the clutches of government and, acting on our own in the absence of stifling regulations, we will provide the American nation with the finest products and services the world has ever known!”  This was their opportunity to demonstrate that proposition in a direct and important way, and they muffed it!  They could easily have taken the lead in an initiative to establish a Universal Fiber Service for the country (while undoubtedly also ingesting some government subsidies along the way).  They already have their own protected service territories, good revenues, they have perfected their ability to keep the FCC subdued, and the path was wide open to proceed on this national goal on their own initiative and to their considerable credit.  The prerequisite need for improved Internet services manifestly exists.

And — the carriers won’t do it!  They prefer instead to wrap themselves in their own monopolies, using that power to keep their revenues and incomes high.  They are not about to invest their capital when good returns are available during the status-quo, without performing any modernization.  And also, when good future returns are available by pressing for (relatively) cheap network expansion into the wireless world.

Shame!  In the words of the commentator and columnist Thomas Friedman, “that used to be us!”  This country used to accept and accomplish large and important jobs.  From winning World War II to going to the moon to flooding the earth with microprocessors to decoding the human genome, “that used to be us.”

Wireless data distribution facilities are fairly low in capital cost in comparison to the cost of pulling in hundreds of thousands of miles of fiber optic cable.  That is why the call is out for “ever more wireless spectrum” for auction.   It’s cheap and it’s dirty, but it will fill at least the current gap for the carriers.  And these carriers can be reasonably assured that no one — not the FCC, not the consumers, not the needs of business and industry — will challenge them on it.

How can RF spectrum be saved?

But, as described in Part I of this series, trying to use the RF spectrum to create a mass-distribution point-to-point network is not a reasonable thing to do on engineering grounds.  Certainly the RF spectrum can handle a limited number of point-to-point dedicated channels (as, for example, in terrestrial microwave).  And of course it is very good at supporting point-multipoint networks.  But using prime spectrum for establishing general, mass audience point-to-point service would seem to be hopeless on the face of it.  And killing off the existing broadcast services, which operate under a hugely efficient network model, would seem to be doubly worse.

So, if the RF spectrum is going to avoid becoming a useless, miasmic swamp of RF interference, broadcasting has to survive.  The alternative mass-audience, information-carrying network models which might replace it are just too inefficient for implementing on such a scarce resource.  And, to survive, broadcasting will have to compete to re-establish itself with and to improve its acceptance by American audiences.  That’s not going to be particularly easy to do in a rapidly evolving world populated (generally) by technologically-unsophisticated consumers.

In the next several postings the Curmudgeon will present some suggestions for restructuring over-the-air AM and FM radio and broadcast television to provide enhanced service that will capture the “ears and eyeballs” of today’s information consumers.