As wireless systems proliferate, the number one adversary of systems designers and service providers is interference. Interference hampers coverage and capacity, and limits the effectiveness of both new and existing systems. Interference is an inescapable fact when wireless communications systems must coexist in extremely complex environments.

What is it about cellular towers that make people react so negatively? After all, cell towers can be a lucrative proposition for some and everyone wants coverage everywhere (“97% nationwide”, “rule the air”, etc.) The proliferation of towers for wireless communications is becoming commonplace across America. However, tower space to operate cellular radio networks is not an effortless endeavor. The Telecommunications Act of 1996 was over 500 pages and while it was being debated most legislators voting on it considered it to only be about deregulation. But buried inside the Act, in Section 704, lay a crafty clause about the siting of cell-phone towers that challenges planning and zoning groups.

Frequently a local municipality or zoning authority has legitimate questions about the health and safety of cell towers and they are obligated to ensure the structure will not create a problem for their citizens. Sometimes the authorities become concerned if the proposed cell tower will interfere with other communication systems (broadcast, Cable TV, smart meters, WiFi, two-way, public safety). Public Safety Communications networks are critical to our well being and as such interference between networks has become an increasingly important issue that needs to be addressed. Often, public safety communication systems are outdated, with their equipment needing repair or systems upgraded with higher quality components. Lawrence Behr Associates (LBA) studies and reports on cell towers, radio frequency (RF) safety as well as interference.

The Telecommunication Act prohibits towns from preventing the location of cell antennas for health or other environmental reasons including RF emissions. The FCC regulates interference and precedence exists from several cases including Freeman vs. Burlington Broadcasters (2000) and Town of Clarkson vs. New York SMSA Limited Partnership (2010). In several other cases, local zoning boards were challenged by tower firms and it was ruled the proposed structure had a positive economic impact. The Act completely preempts any local consideration of RF safety or health effects notwithstanding interference can be a serious issue especially within public safety networks. 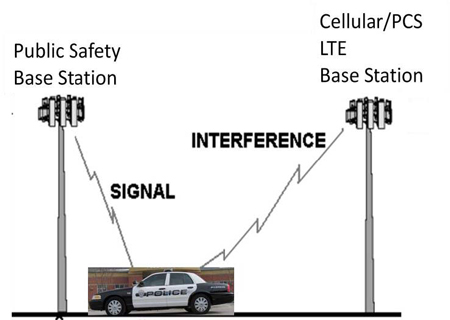 As a case in point, a town in Illinois accepted an application from SAC Wireless (SACW) representing AT&T for a special use permit to construct a 175 foot monopole. The application was presented to the town by Lew Caliento of SACW along with Attorney Jim Leahy of Encore Development Group who represented AT&T as well as expert testimony from LBA. The towns’ public safety communications authority was very concerned the proposed 1900 MHz PCS base station would interfere with their 850 MHz trunked radio system. Commercial cellular radio networks that operate in the cellular 850 MHz band are proven to potentially interfere with adjacent channel public safety systems. In fact, there are anomalous adjacent and co-channel emitters in parts of the country that routinely cause performance degradation to cellular and PCS networks. Typically, these emitters cause a significant increase in the noise floor of 2G and 3G CMDA based networks including the “big two” companies. When the noise floor rises, system performance suffers and metrics including accessibility and retainability begin showing up in the top of an engineering director’s inbox.

Although the intermodulation study eased somewhat the fears of the public safety communications authority, the town was concerned the “noise floor” would be adversely affected by the proposed PCS installation. LBA performed field measurements around the town to document the public safety communications noise floor. The results of the field measurements reveal the average noise floor level in the 850 MHz band was only a few dB above the minimum discernable signal. Because the tower carrier deploys base station equipment that has sharp filtering to remove out-of-band emissions, the potential for noise induced failures to the public safety network is insignificant. After all, the PCS band is twice that of the 850 MHz public safety band. Similarly, the FM band is about twice that of the CB radio band. Do you ever hear an FM station on a CB radio channel? 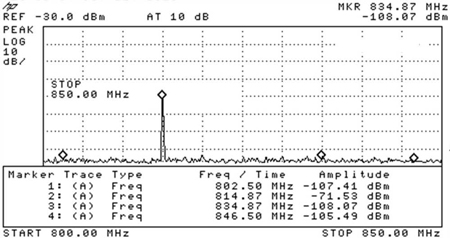 It is hard to claim there is absolutely no noise energy impact from PCS carriers to 850 MHz networks but in this case the Town heard arguments that were based on imaginary interference created from misconceptions and false ideas rather than real evidence. Like ghosts, imaginary interference has not been proven scientifically. Therefore, when deploying base stations where there is a concern of interference, rather than spending millions of dollars on cancellation devices, consider an intermodulation study, passive intermod (PIM) testing and field measurements to demonstrate concrete evidence. For more information on interference see devlbagroup.com

“We interrupt our continuing narrative about spectrum utilization for a breaking news story!”